NEW SINGLE: End of the Summer by SKYTONE

As we get back in action, we have a brand new album to be released on our label in May, which I’m very excited about, it’s an album by James Clarke Five, the latest project by James Hughes (AKA Clarke), an amazing musician who played in the short lived, but very talented 80’s Liverpool band, The Cherry Boys who were contemporaries with the Teardrop Explodes and Echo & The Bunnymen and Wah! but had a unique sound of their own, influenced by a mod sound but incorporating some of the post punk sound also. Sadly they only released a handful of singles, but they were all amazing, with one of my all time favorite songs being Kardomah Cafe. In more recent years, James has released several solo albums that didn’t get the attention they deserve. This new album, reminds me at times of Madness, as well as some of Terry Hall’s solo albums and has been compared to The Zombies and The Left Banke – hope you enjoy it. 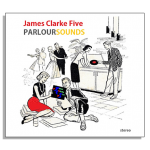 Here’s a review from Jack Rabid, featured in the upcoming issue of Big Take Over magazine.

“Not the Dave Clark Five, Sex Clark Five, or James Gang, this is Jimmie Hughes of early ’80s Liverpool faves The Cherry Boys. Unlike Zoo Records’ legends (Bunnymen, Teardrop Explodes, Wah!, Big in Japan, etc.), their half dozen strong singles couldn’t parley Merseyside popularity into stardom, although two members went on to The La’s. 35 years on, their ex-keyboardist/singer is still playing harpsichord/piano-based sugar pop like the Cherrys’ best platter, the La’s/Ocean Rain Bunnymen/Pale Fountains-ish “Kardomah Cafe.” His ripening is the baroque feel in “Jade” or “Just a Smile,” like a mash of 1968 music by Paul McCartney, Kinks, Emmit Rhodes, Left Banke, Zombies, Cyrkle, and Association. That’s the purlieu of Belle and Sebastian, only Parlour is more akin to Roddy Frame, Andy Partridge, Martin Newell, and lighter Bevis Frond (with a voice more like Supertramp’s Roger Hodgson). The above wrote/still write great songs; so, too, does Hughes.” –Jack Rabid, Big Take Over