Armstrong’s (aka Julian Pitt) new album, Fragments And Curiosities, is Julian’s third long player (and second on Canadian indie label The Beautiful Music). It is out now — available as a CD (directly from the label) and from select distributors, with digital download coming soon.

Armstrong is one of those mysterious and elusive bands that stays well beneath the surface (just try and find any information on-line), but anyone willing to dive a bit deeper is richly rewarded with pearls of great value and will appeal to fans of pur pastoral or jangle Pop like Aztec Camera / Roddy Frame, Pale Fountains, Prefab Sprout, The Divine Comedy, Andy Pawluk, Red House Painters, The Zombies, etc. The new album is eagerly anticipated and sought out by a growing number of fans, and is a welcome return. Alex Green wrote about his debut album: “Under Blue Skies is one of the most satisfying and melodic albums in recent memory…Armstrong’s lustrous debut presents Pitt as the new unheralded prince of pastoral pop. With a voice that lilts and soars like Roddy Frame or The Pearlfisher’s David Scott, Pitt is truly a splendid find.” – Caught In The Carousel. David Bash, the noted Pop authority and founder of the International Pop Overthrow music festival recognized Julian’s talent and had him play the festival in Liverpool at the Cavern Club.

An old NME review made a similar comparison to Aztec Camera as well as Teenage Fanclub and Ash in reviewing an earlier 7” single. BBC’s Tom Robinson added “Classic, Vintage, Orchestral Pop Songwriting”. On “Songs About The Weather” Powerpopaholic stated: “Fans of sunshine and baroque pop would do well to check out the latest album from Armstrong … If you enjoy wistful ballads and sun-kissed melodies that are brimming with emotion you’ll want to listen to Armstrong”

Some of the simplest forms of pop music are the ones that become the most meaningful to us, which is where I’m left after spending some time with this new Armstrong track. It’s part of the new album, which features unearthed recordings and B-Sides, and this listen is making the world just a bit brighter today. You’ll mostly hear the voice of Julian Pitt lightly draped atop strummed guitar and piano play. If you need a great ballad, or just generally looking for something to make you feel good, then go here. – http://austintownhall.com/2017/01/23/new-music-from-armstrong/

This album is a compilation of rare tracks and semi-live rehearsals with the 4 Bonus Tracks salvaged from poor audio sources, but were sadly the only remaining documents of that era so we wanted to include them, thus the title “Fragments And Curiosities”. Overall it makes for a beautiful album and will provide you with a much needed relief from this ‘Crazy World’ as we await the completion of Julian’s next album “Happy Graffiti”. Sit back, Enjoy!

Special thanks to http://www.analora-photoart.de for the beautiful starfish photo for the artwork. 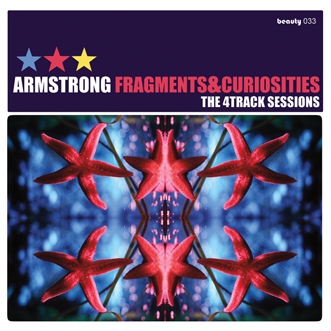 “Fragments And Curiosities – The 4Track Sessions” is available as a CD (Beauty 033) directly from The Beautiful Music’s secure, PayPal-enabled ordering portal at www.thebeautifulmusic.com and for a limited time will come with a free copy of “Songs About The Weather” (Beauty 014)