Music Is The New Social Icon

The Direct Hits – Blow Up! Revisited

To say that I am excited about the revamping of the wonderful Blaamm Records and the release of the Direct Hits – Blow Up Revisted CD, would be a huge understatement. The Direct Hits (http://www.thedirecthits.co.uk/Welcome.html ) were one of the most essential bands to come out of the mod revival period in the early 1980’s and has been called “One of the 1980’s great cult pop secrets”. They were mainly comprised of Colin Swan and Geno Buckmaster along with Brian Grover on drums, although they had various other drummers pass through their ranks. The Direct Hits were formed following the demise of The Exits, a new wave pop band who released only one single “Fashion Plague” back then but had a full album retrospective release on Rev Ola through Cherry Red Records a few years back. The Direct Hits released several excellent 7” singles, which are now quite rare and two full length albums “Blow Up!” and “House of Secrets” along with several essential 12” Ep’s. Colin Swan was and still is an amazing songwriter and pop tunesmith and went on to release many fine gems either as a solo artist or with his band This Happy Breed (which is another story for another day as is Colin’s reappearance in The Cult 45’s for a Television Personalities cover on volume 2 of the tribute series) after The Direct Hits disbanded. He was even offered a spot on Creation Records in their early days, which for various reasons didn’t materialize.

Blaamm Records ( http://www.blaammrecords.com/home.html ) was set up by Colin Swan back in 2003 as a way of re-issuing the long out of print Direct Hits album “Blow Up!” (And was followed up by several other rare Direct Hits releases and a very limited edition label sampler, that was absolutely fabulous), an album which was originally released on Dan Treacy’s Whaam! Records back in June 1984 (Cat No. BIG 7). This album quickly became and has remained a defining moment for the 80’s Mod Revival and is an album which is full of aural treasures and delights despite its meager recording budget. (for Television Personalities fan’s it also featured Dan Treacy on several songs). The vinyl version of this album as well as the single below are now highly sought after collectibles.

The Direct Hits had so many top tunes and knew how to borrow from the 60’s original Mod sound but actually improve on it to create a sound totally their own. Songs like the snappy ”Ever Ready Plaything”, the spy homage of “Modesty Blaise” (which strangely was not on the first album but released as Whaam 007)), “Miranda Berkley” and it’s spot on period portrayal (which was incidentally covered by The Void on “Into The Jet Stream Of Pop” compilation and soon to be included on “The Great British Beat – Volume 1”), “A Place In The Eighties”, “She Really Didn’t Care”, “Christopher Cooper” and laid back groove of “The Ordinary Girl” were a few of the timeless gems that were scattered through the album and early 7” releases. Then there was the second album which I will not even get into right now.

The Direct Hits created a world of their own, one that was fun to be part of, even if you lived thousands of miles away as my brother and I were when we joined the Direct Hits fanclub. We loved The Jam and The Cortinas and Mertan Parkas and The Purple Hearts, but The Direct Hits were different, they were special, because we were part of their world – a whole world of newsletters, buttons and most importantly, scores of rare cassette releases through their very own Direct Tapes label which featured numerous bands that were completely unheard of, but somehow always sounding pretty amazing. There were bands like The Activation (which I spent many hours searching for their records, much to my disappointment – try to find info on them now in the modern age of technology and you still can’t), Jenny Brett, The Northwoods, The Open Door, Sheila Lewis and others that I can’t recall at the moment. Some of these bands would at times sound strangely similar to the Direct Hits (maybe there was a conspiracy in there somewhere or they had many talented musical friends). A very incomplete discography of the Direct Tape label can be found here – http://www.discogs.com/label/Direct+Tapes .

They would also include on their tape label a whole series of great releases like the Direct Diamonds series (3 volumes) or The Great British Beat series (I think there was 4 volumes, and later revived for two 7” single releases on Germany’s Little Teddy Records – pictured above) which at times included bands like The Page Boys, The Mixers, The Activation and The Catalysts (most likely Ulric and Dannie from The Mixers) and more. The Direct Tape label also featured solo releases by Colin Swan, Geno Buckmaster and Phil Ward (another favourite of mine from The Mood Six, another great overlooked band of that era), along with the wonderful cassette “The Special Magic Of Dan Treacy” by The Open Door (which was later redone as “Portrait of Dan Treacy” on 7” single by Little Teddy Records), where Colin Swan and Geno Buckmaster cover four Television Personalities songs (see JC Brouchard’s review of that cassette here – http://vivonzeureux.blogspot.com/2007/08/open-door-special-magic-of-dan-treacy.html ) 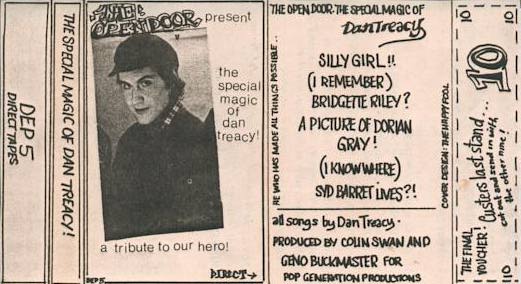 As I usually do talking about bands and music I love, I have easily been distracted, so I’ll get back on topic. The Direct Hits were one of my favourite bands in the 80’s and they were very influential in warping my musical tastes and they often sent me in many directions forwards and backwards, searching for a host of amazing bands that were cloaked in secrecy, or searching for the original of a song that was covered by bands on the various cassettes, which in turn gave me a great historical education of the music from an earlier era.

So to say I’m excited to see the Blow Up album redone, well that’s a no brainer. This release is not intended to replace the original album, (which is something that is very hard if not impossible to do), but to be a companion piece to the original album to take things in other directions and show you what the album might have been in an alternate universe. It’s labeled a “New Version of Classic Eighties Mod Album” and “Features Previously Unreleased Material”. Almost all, if not all the songs are reworked and remixed, with extra embellishment and instruments thrown in. In some cases, a completely different alternate recording is used as in the case of “Miranda Berkley”, where a previously unheard version of this song is included, which is much faster than the original and is a real treasure. Several songs which were never included on the original album are now added along with conclusion to “Henry The Unhappy Inventor”. Welcome to the wonderful world of “Blow Up! – Revisited” – the Mod revival has never sounded so good!  ( http://www.thedirecthits.co.uk/Welcome.html )